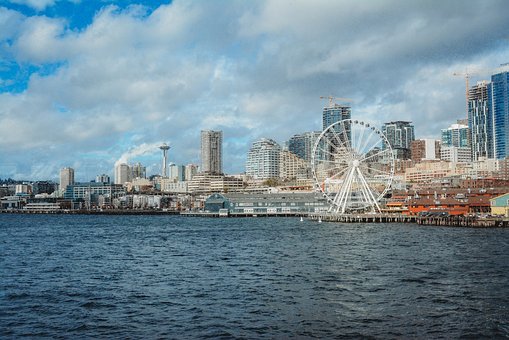 The Pacific Northwest has become a favorite destination for many Americans. The natural beauty and the special culture that constitute Seattle might be why the city is a popular travel and relocation destination. Or is it because its home to the largest houseboat people in the world and everyone wants to feel like a pirate? However, the fact remains that it is now the 3rd fastest growing city in the USA with a steady incline of 15,000 new residents moving here each year (for the past 4 consecutive years)
Here are a few interesting facts that everyone should know before going to Seattle.
1. Seattle gets a bad rap for a city that is continually rained out. This isn’t actually true, as New York City and Boston get more real rainfall each year by quite a lot.
2. The grey is a real thing. Its been said the misty/fog that’s so often in the atmosphere makes it constantly like a noir film. So although it may not really be raining, it is a rather wet city.
3. It’s the Fourth Safest City in America. That’s right, crime is so low that locals will tell you if you jaywalk you WILL find a ticket and a fine because the police have less to do in regard to crime than other towns. Honking is considered a kind of noise pollution. Seattle dwellers really won’t honk unless it is actually to prevent real danger or an accident. Other than that locals will have the ability to point out a tourist if they are honking their horns constantly. Fashion is very relaxed but everyone is sort of judging your coat. Because of the tech industry and the continuous mist, most people in Seattle do not mind dressing a bit more casual. The one thing that most people will comment or compliment you on is your taste in outdoor wear. Heal REI, Northface and Moncler as the Channel of Seattle and Pacific Northwest couture.
6. Most people will say they don’t like Starbucks and favor local java, but being where Starbucks was’born’ there are more of them per capita than any other city. So someone has to be visiting them…
7. Seattle has been called dog Disneyland as they boast so many off leash parks and it looks like almost everyone has a dog. Seattle has so many beautiful outdoor adventure hikes and parks both in and just outside the city it is a perfect place for a 4-legged buddy.
8. The space needle may have attracted attention from locals as it was constructed in only 400 days for the 1962 Worlds Fair but these days just tourists stop to stare… so if you want to fit in your new home don’t be caught gazing up for too long.